I discovered that the corrosion in the under-deck backing plate for the stern chainplate on Avy-J was far more advanced than I thought, and it became obvious  it would be necessary to build a new chainplate. The raked transom (raked at about 45 degrees) means that this is not as easy as it might be on a flat transom.

The existing arrangement (shown below) has the transom plate embedded in the hull, connected to the top (deck) backing plate with the transom plate and the deck plate triangulated by two struts of metal. You can get the general idea from the diagram below (not to scale) 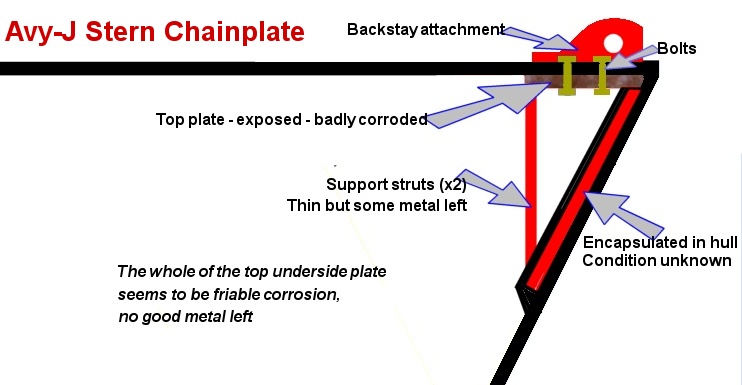 Options seemed to be: 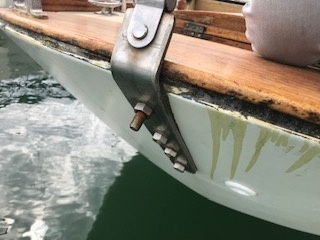 In the end I put my head together with a friend and we came up with this design – a wide rectangular plate tapering to couple of inches wide at the top, bent to the appropriate angle (to line up with the masthead) where the dotted line is. Material is 6mm stainless. This way it can be bolted through either side of the embedded metal with two separate backing plates, no need to cut anything out. 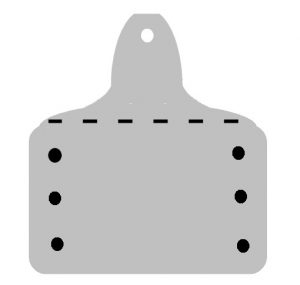 The tricky bit was getting the slight curve of the transom in the plate, and the even trickier bit was curving the top (at the dotted line) in a different plane to the transom curve. I took the project to a very capable local stainless steel fabricator, who said the only way to marry the two curves together was to make it in two separate pieces and weld them.

(This guy is brilliant, but I can’t give you his name as he would have to kill me – he has far too much work, for better paying customers than impoverished yachties)

The plate came back beautifully finished. The only difficulty was getting the top bolts in as they were very close to the hull/deck join. I had to remove a couple of the rubrail bolts to get the backing plates, in, and these had to be cut down so the top hole was right at the top. 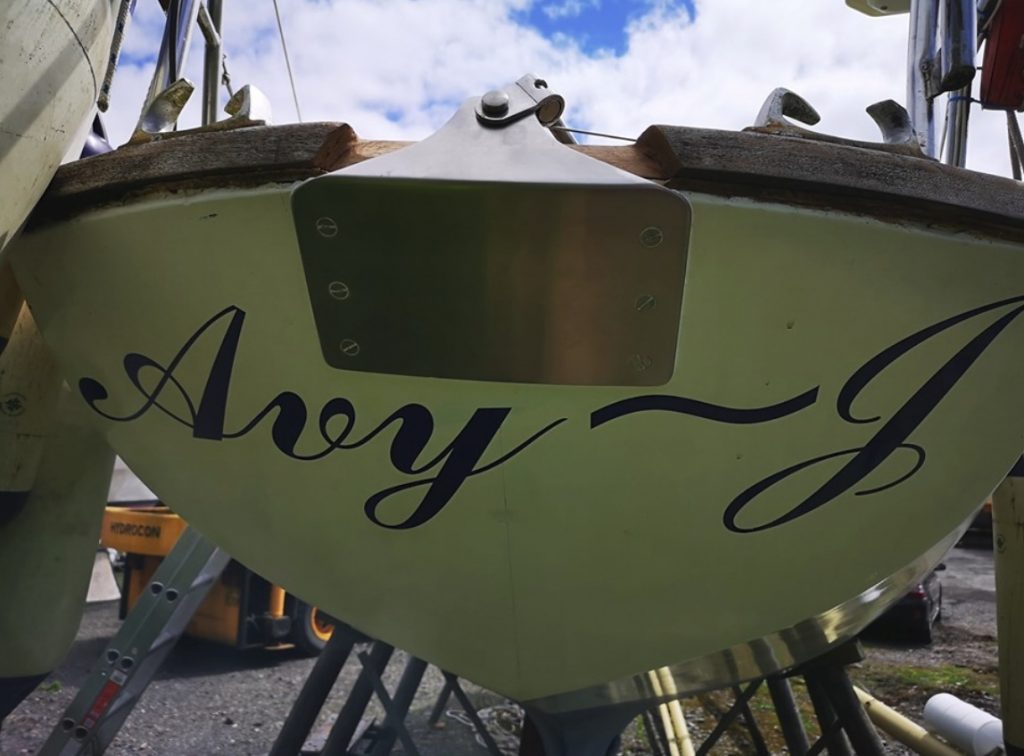 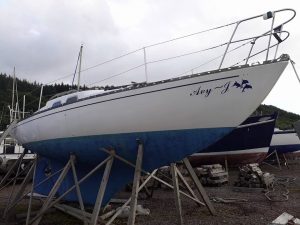 Catherine and I have just acquired Avy-J. We know very little about her. She is currently on the hard in Dunstaffnage, Oban, but we are hoping to launch her and move her to the Isle of Seil sometime over the next week. Stage one – buying the antifoul – is complete, just waiting for the rain to stop!

I see from the list of MG30 yachts on this site that she was previously named Emma J May, but that is all we know about her. We have no previous history, and are not even sure when she was built.  If anyone does have any previous history for her we would be very interested.

UPDATE
I have discovered that the vessel is still registered under Part I of the British Register at the port of Guernsey as EMMA J, and is on the register as a Morgan Giles 30, 1977

As we do not have the necessary paper trail (all the Bills of Sale etc) and as we prefer Avy-J to Emma J, we will have her taken off the part 1 register and will put her on the UK Part 3 SSR

Any cookies that may not be particularly necessary for the website to function and is used specifically to collect user personal data via analytics, ads, other embedded contents are termed as non-necessary cookies. It is mandatory to procure user consent prior to running these cookies on your website.